Walking where the fallen leaves are still crisp. 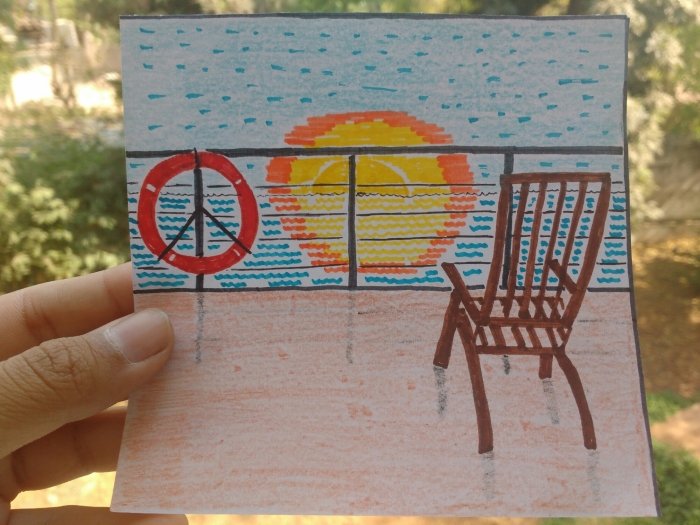 On one of his travels, Uncle Victor was going to Myanmar by ship. Since this was his first voyage, he kept his belongings in his cabin and went to the deck to enjoy the sea breeze. He even drew a picture of the deck which I have replicated above. He found company on the deck and sat chatting till 3 am. When he finally reached his cabin, it was only to find that the cabin had been locked the inside. The cabins were allotted on twin sharing basis and upon realising that uncle wasn’t coming back, his cabin mate had locked the door from inside. For some reason best known to him, this made him very anxious. So, in desperation, he kicked the door. Instead of opening it, he managed break a part of the door thay had resulted in an opening at the bottom. Seeing no other way, he squeezed himself in through the newly formed gap.
Moments later, he sat in the room, enjoying the snacks the cabin mate had kept on the table. At this point, the cabin mate woke up, surprised. He wanted to know how and why had a stranger entered the locked room in the middle of the night.

Now, my uncle could have simply told him how he came in. Instead, he chose to ask the guy to lock the door again and demonstrated the entire process again.